What is Stevia Made from? 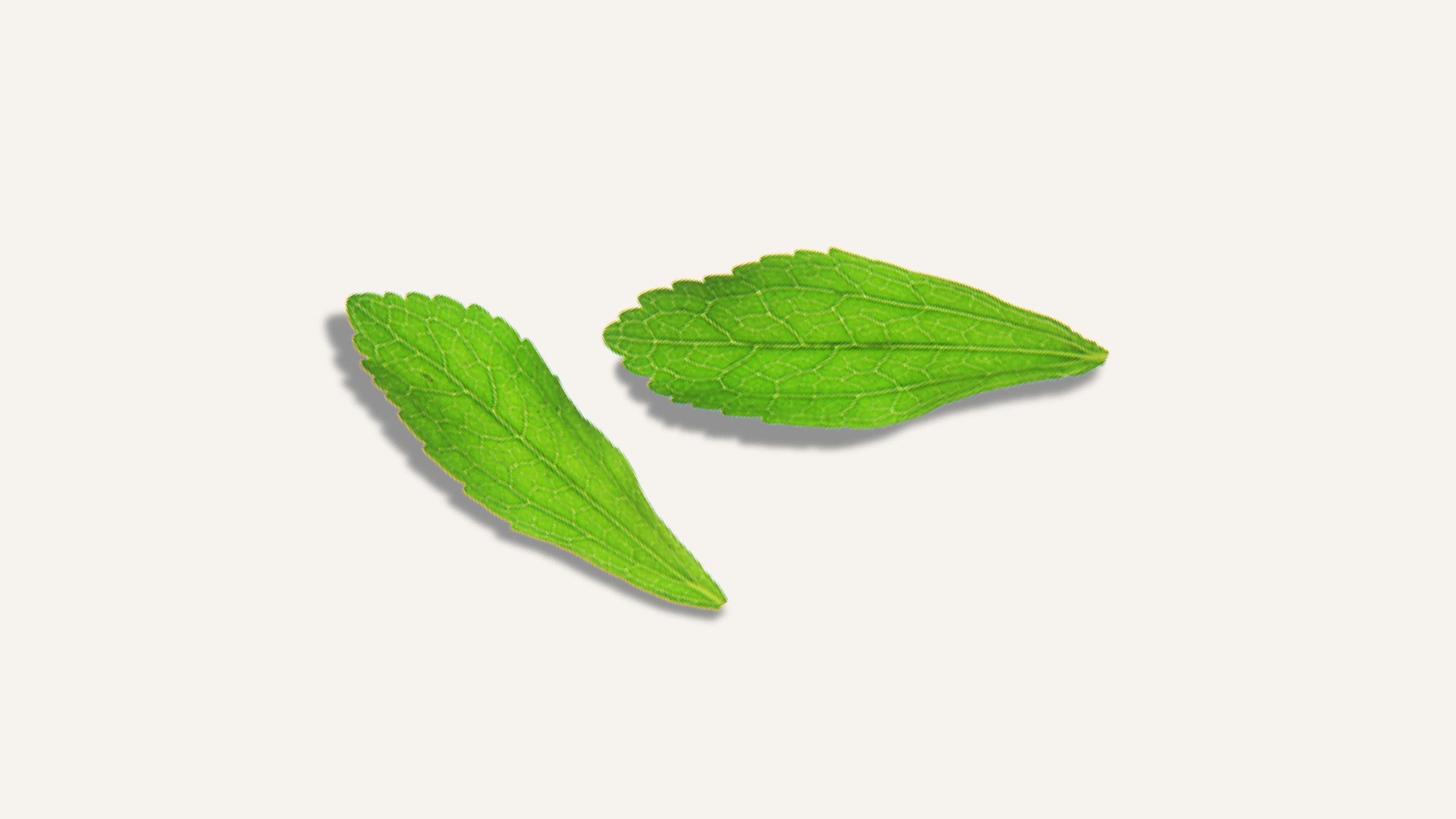 What is Stevia Made from?

For people who crave the sweetness of sugar but not the calories and elevated blood sugar, stevia has become a popular option.

What exactly is stevia? What is stevia made from? Is stevia good for you?

What is stevia, and what is it made from?

Stevia is a sweetener and sugar substitute derived from the leaves of the Stevia rebaudiana Bertoni plant, an herbal shrub native to South America (Brazil and Paraguay, specifically). The plant is also known as candyleaf, sweetleaf or sugarleaf.

Steviol glycosides all have a common basic backbone called steviol. As noted in the 2016 article  “Biological fate of low-calorie sweeteners” published in Nutrition Reviews, steviol includes compounds like stevioside and many different forms of rebaudiosides. Rebaudioside A (or reb A) is the most common of rebaudiosides. Some steviol glycosides are made through processes called bioconversion and fermentation, allowing sweeter and less bitter stevia rebaudiosides to be produced on a larger scale for consumption.

Per Reuters, stevia has been especially in-demand in countries like Japan for decades, but the natural sweetener has made a major splash in the United States over the past few years. According to the U.S. Food and Drug Administration (FDA), purified extracts of steviol glycosides are deemed Generally Recognized As Safe (GRAS). As noted in a 2015 article titled “Stevia, Nature’s Zero-Calorie Sustainable Sweetener” published in the journal Nutrition Today, the Joint FAO/WHO Expert Committee on Food Additives (JECFA) has established an acceptable daily intake (ADI) of 4 milligrams (mg) per kilogram of body weight per day.

Stevia is especially popular among people looking to lose weight, as stevia can add sweetness to foods without adding calories, carbohydrates, sodium or fat. Stevia also rates a zero on the glycemic index. Stevia does not contribute any calories to a person’s diet because purified steviol glycosides are not absorbed in the upper gastrointestinal tract. When they reach the colon, gut microbes cleave off the glucose molecules and use them as an energy source. The remaining steviol backbone is then absorbed, metabolized by the liver and then excreted in urine, according to a 2008 study titled “Comparative toxicokinetics and metabolism of rebaudioside A, stevioside, and steviol in rats” published in the journal Food and Chemical Toxicology.

Although stevia is calorie-free, carb-free and fat-free, stevia is actually 200 to 300 times sweeter than sugar, per the Cleveland Clinic. The sweetness of just a pinch of stevia is equal to about one teaspoon of table sugar. With its low calorie count combined with its intense sweetness, many people have turned to Stevia as a healthful alternative to sugar. It’s frequently used among people with diabetes, high blood pressure and weight loss goals.

In addition to being natural and calorie-free, stevia actually has a number of health benefits. According to a 2019 study titled “Effect of Steviol Glycosides on Human Health with Emphasis on Type 2 Diabetic Biomarkers: A Systematic Review and Meta-Analysis of Randomized Controlled Trials” published in the journal Nutrients, stevia has been shown to have several health benefits. The study’s systematic review of stevia showed reductions in blood pressure — particularly systolic blood pressure. (Systolic blood pressure is the top number in a blood pressure reading and refers to the amount of pressure in your arteries during the contraction of your heart muscle.)

Because stevia is all-natural, users can avoid the drawbacks of arti?cial sweeteners like aspartame and the dangers of excess sugar. According to a 2016 study titled “Relationship between Added Sugars Consumption and Chronic Disease Risk Factors: Current Understanding” published in the journal Nutrients, consumption of added sugars leads to an increased risk of a variety of chronic diseases including obesity, cardiovascular disease, diabetes and non-alcoholic fatty liver disease (NAFLD), as well as cognitive decline and even some cancers. Per the Dietary Guidelines for Americans, added sugars should be limited to 50 grams per day for adults. An article titled “The sweet danger of sugar” published by Harvard Medical School’s Harvard Health Publishing references a study published in 2014 in JAMA Internal Medicine that found an association between a high-sugar diet and a greater risk of dying from heart disease. Over the course of the 15-year study, people who got around 17% to 21% of their calories from added sugar had a 38% higher risk of dying from cardiovascular disease compared with those who consumed 8% of their calories as added sugar. One tablespoon of sugar contains around 48 calories, while a tablespoon of stevia contains 0 calories. The study concludes the higher the intake of added sugar, the higher the risk for heart disease. The article also notes consuming too much added sugar can raise blood pressure and increase chronic inflammation. The effects of added sugar intake in excess of 50 grams per day — higher blood pressure, inflammation, weight gain, diabetes and NAFLD — are all linked to an increased risk for heart attack and stroke. In a 2020 study titled “Effects of stevia on glycemic and lipid profile of type 2 diabetic patients: A randomized controlled trial” published in the Avicenna Journal of Phytomedicine, no significant differences in fasting blood sugar levels between the baseline and after two hours were seen in participants after consuming stevia. Additionally, no differences in blood insulin levels, glycosylated hemoglobin and lipid levels were noted post-stevia consumption (unlike what is seen post-sugar consumption).

As noted in the 2019 stevia study referenced above, indigenous people have safely used extracts from the stevia plant as sweetener for foods, beverages and medicines (such as a treatment for diabetes) for decades; however, there are a few possible side effects of stevia that are important to note.

Some people report experiencing gas, nausea or bloating related to stevia consumption. A 2018 New York Times article about the possible downsides of stevia reports that some products containing stevia also include sugar alcohols like erythritol, which can cause digestive complaints if consumed in large amounts. That said, a 2017 study titled “Effect of Incorporating Stevia and Moringa in Cookies on Postprandial Glycemia, Appetite, Palatability, and Gastrointestinal Well-Being” published in the Journal of the American College of Nutrition notes symptoms like bloating and diarrhea have not been shown in many stevia studies. Refined stevia extracts are considered safe; however, research on whole-leaf stevia products is admittedly lacking.

There is also the possibility of an allergic reaction. Stevia can cause allergic reactions in people allergic to any plant from the Asteraceae family, or sunflower family. The aster family includes daisies, ragweed, chrysanthemums, sunflowers and the Stevia rebaudiana plant. According to the Mayo Clinic, signs of allergic reaction may include:

In addition to stevia, another all-natural, plant-based source of sweetness is monk fruit. Monk fruit extract is a sweetener derived from the small melon called luo han guo. The melon is native to parts of southeast Asia and was first used by Buddhist monks in the 13th century. (That’s where the melon gets the name “monk fruit.”) For centuries, monk fruit was used as a cold and digestive aid, but today it is commonly used as a sweetener.

Monk fruit extract has a number of health benefits. According to a 2018 study published in the Journal of Chromatography B: Analytical Technologies in the Biomedical and Life Sciences, antioxidant mogrosides can help protect against diabetes. Its anti-inflammatory properties are why monk fruit has been used for centuries to make hot drinks to treat sore throats, reduce phlegm and work as a cold and digestive aid. According to a 2011 article titled “Anti-inflammatory Activities of Mogrosides from Momordica grosvenori in Murine Macrophages and a Murine Ear Edema Model” published in the Journal of Agricultural and Food Chemistry, the natural sweetening mogrosides contained in monk fruit are antioxidative, anticarcinogenic and helpful in preventing diabetic complications. With no calories, carbs or fat, monk fruit is a great option for people looking to lose weight or cut out sugar in general. Many nonnutritive sweeteners can cause allergic reactions or side effects like gas and bloating, but monk fruit extract has no known side effects.

Despite their slight differences, both stevia and monk fruit are great sweetener alternatives and can help add a sweet taste to meals or drinks without added calories, sugar and carbohydrates. They taste great on their own, and they also taste great together. Many top brands actually use a blend of these two natural sweeteners — Gainful included.

Sweeten up your protein with stevia

At Gainful, we also use both stevia and monk fruit to give our products natural sweetness. In fact, monk fruit and organic stevia leaf extract are the only two sweeteners used in Gainful products.

Gainful allows users to create a personalized protein blend made specifically for their body, diet, lifestyle and overall wellness goals. Protein supplements can assist in weight management and weight control, as well as muscle building. Every Gainful protein blend comes 100% unsweetened and flavor-free, but each order includes Flavor Boost packets. These Flavor Boosts are made with stevia extract and monk fruit extract and come in a range of natural flavors so subscribers can switch up the flavor of their protein as often as they desire. Flavor Boosts are available in flavors like Rich Cocoa, Cookies & Cream, Caffè Mocha, Chocolate Peanut Butter, Strawberry Cream, Madagascar Vanilla and Matcha Green Tea. These small packets provide a delicious flavor and a sweet taste, without any added sugar, artificial sweeteners or additives. Simply mix one or two scoops of personalized protein powder with water, ice-cold milk (almond, soy or any other type) or your favorite beverage, add your Flavor Boost packet, shake and enjoy.

(For best results, mix 4-8 oz of liquid per serving of protein powder. Your protein powder and Flavor Boosts can also be mixed with smoothies, oats, peanut butter, vegetables and fruits.)

Even better: The stevia we use is a special, debittered stevia extract that tastes remarkably similar to natural cane sugar without the notorious strange aftertaste or bitterness.